Warning: count(): Parameter must be an array or an object that implements Countable in /home/customer/www/cfbrandtjewelers.com/public_html/wp-content/themes/virtue/lib/cmb/init.php on line 714
 What Are The Classic Gemstone Cuts and Shapes?  Pt 2 - C F Brandt Jewelers
Skip to Main Content

In the first blog in this series, we covered the classic round brilliant diamond cut.  This week, we’re looking at the next 3 classic gemstone cuts on our list: Pear (Drop), Oval and Princess Cut. 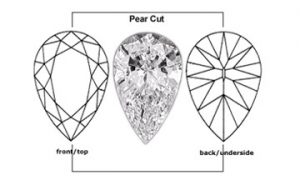 The pear or drop cut is exactly as it sounds…it is shaped like a pear or a drop of water.

It is a combination of two other classic gemstone cuts, the round shape (which we covered last week) and the marquise shape that we will cover later in this series.  The result is a rounded end, which you could call the bottom of the pear or water drop, and a tapered pointed end.

While round brilliant is considered to have the most dynamic sparkle, the pear cut holds its own for sheer beauty and is one of the three cuts scientifically proven to be second only to round in its sparkle for diamond cutting.  This cut is also used on numerous other gems including rubies, sapphires, tanzanite, garnets and more. 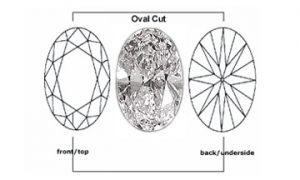 Diamonds are the benchmark for the sparkle and shine of different cuts and oval is no exception, joining pear and marquise in the second tier of gemstone sparkle.  Sapphires, topaz and amethyst are among the stones popularly cut in this style.

In particular, diamonds show a unique effect called the “bowtie effect” when oval cut.  This is caused by a dark space across the center of the diamond as a result of the elongated oval shape.  Like the round brilliant cut, the oval typically has 58 facets while the round cut tends to command a higher price because its compact shape exhibits more sparke and fire.

Oval is not only popular for its amazing radiance, the shape itself tends to make the stone appear larger than it is for its carat weight. 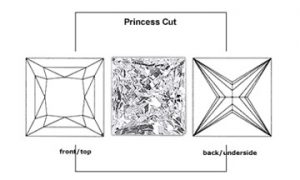 This style is one of the newer gemstone cuts as it originated in the 1960s.  It also has steadily become more and more popular over the years and is second only to round brilliant in its popularity.

The finished stone will be square or rectangular with four beveled sides and the bottom of the stone coming to a point, which makes it look like an inverted pyramid from the side.

An interesting facet (pun intended) to the princess cut diamond is that it is technically cheaper than round brilliant because it retains more of the original rough gem material.  It may sound a bit convoluted, but as we covered last week a round brilliant cut stone will be about half the size of the original rough stone. Conversely, a princess cut diamond retains more of the rough stone size and winds up being about 80% of the size of the original stone, which means that basically less of the gem is wasted in the cutting process.

Of course, many gems look stunning in this style including aquamarine, emerald, citrine, amethyst and topaz.

If you have questions about various facets of gemstones or want to talk to us about making you a custom piece of jewelry, stop by our store or give us a call at 301-574-4400.