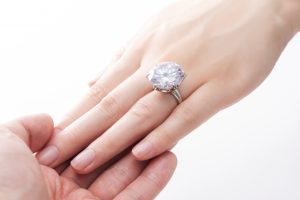 Undoubtedly, whenever we think about jewelry the first thing that comes to mind is engagement rings.

Engagement rings have been a part of our lives for centuries and are an important part of the ceremony and ritual in the act of marriage.  We have lived life basically accepting it as part of our heritage and tradition, but where did this all start?

We can go back as far as ancient Rome.  While the concept may have existed prior to that, historical records confidently trace engagement rings back to Rome.  Engagement rings are traditionally placed on the left hand on the ring finger.  It was once believed that the left ring finger actually contained a vein called the vena amoris, which allegedly led to the heart, a belief whose origin has been traced to the ancient Roman book Attic Nights by Aulus Gelius.

It wasn’t until after the middle ages and well into the Renaissance that diamond were first documented as being used in engagement rings, first when Mary of Burgundy was given a diamond engagement ring by the Archduke Maximilian of Austria in the year 1477.  Because of this, the diamond became known as a status symbol of the higher class to represent significant wealth.

In 1866 diamonds were first found in South Africa and by 1872 production had increased to the point where diamonds were available to everyone, although it took a while for diamond engagement rings to catch on with the general public because they were still seen as something only for the rich and privileged.  It was in 1938, as the US was coming out of the Great Depression, that the diamond cartel known as De Beers began marketing diamond engagement rings during a time when engagement rings seemed to be going out of style with the younger generations.

It was at this point that De Beers began educating the public about the “4 C’s”:  Cut, Carats, Color and Clarity and by 1947 the well known slogan “A Diamond Is Forever” was introduced into public consciousness and the popularity of diamonds has only increased ever since.  While there is such a thing as an engagement ring with precious gems other than diamonds, the evolution and history of diamonds has added to their mystique…

Contact us today or stop in to see our selection of beautiful diamond engagement rings!