Warning: count(): Parameter must be an array or an object that implements Countable in /home/customer/www/cfbrandtjewelers.com/public_html/wp-content/themes/virtue/lib/cmb/init.php on line 714
 Argyle Alpha Unveiled As The Largest Vivid Pink Diamond - C F Brandt Jewelers
Skip to Main Content 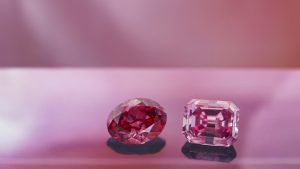 On July 12, the largest vivid pink diamond on record was unveiled in Sydney, Australia…and it’s quite spectacular!
We have covered diamonds and the color spectrum of diamonds previously on our blog, but let’s have a refresher as to the difference between pink and vivid pink…
It’s really what you would expect…pink diamonds show a definite pink color, usually on the lighter side.  A vivid pink diamond, which is more rare (and,

therefore, more valuable), has a deeper and richer pink color as shown in the picture here.

The Argyle Alpha, showcased by Rio Tinto (a London-based mining company), is part of a 63 diamond tender that is more than 51 carats in total.  These diamonds come from Western Australia in the Argyle mine, which is closing in  2021 due to the depletion of colored diamonds…which makes these diamonds both more precious and phenomenally rare.
Pink diamonds belong to the fancy color diamonds category, which we

discussed in more detail back in April.  There is no one concrete reason for the pink color in a diamond.  Some believe it is due simply to the presence of other minerals in the formation of the diamond, while the theory regarding the color of the pink diamonds from the Argyle Mine in Australia surmises that these diamonds started out colorless until they were thrust to the earth’s surface by a seismic shock from earthquakes or volcanic eruptions.  According to this theory, the molecular structure of the diamonds was altered, resulting in the pink hue.

The accepted theory is similar to that of the Argyle Mines in that the diamonds were subject to very intense pressure while they were being formed, with the pressure resulting in the appearance of pink.
If you have any questions or are looking for white diamonds, fancy color diamonds or other precious gems, contact us or stop by and see us today.  Let’s talk gems and find you the perfect piece of jewelry you’re looking for!