Warning: count(): Parameter must be an array or an object that implements Countable in /home/cfbrandt/public_html/wp-content/themes/virtue/lib/cmb/init.php on line 714
 10 Cool Facts About October Birthstone Tourmaline | CF Brandt Jewelers
Skip to Main Content 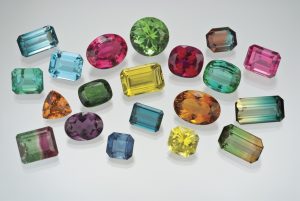 2.  Schorl is black or brownish-black, dravite color ranges from a dark yellow to a brownish-black and elbaite comes in a variety of colors from colorless to blue, green and pinkish-red.

3.  In the 1600’s when the Dutch East India company was bringing gem tourmalines of various colors from Sri Lanka to Europe, many of the colored stones were believed to be zircons.  It wasn’t until around 1703 that it was discovered that the brown/black schorl variety was indeed the same mineral as these beautiful, colored and transparent gems.

4.  Tourmaline has pyroelectric properties, which basically means tourmaline crystals are naturally electrically polarized and actually contain electric fields as a result.  Because of this, it has been referred to as the “Sri Lankan Magnet” due to its ability to both attract and repel hot ashes.  Interestingly, tourmaline was once used to clean dust out of pipes.

5.  Tourmaline has often been confused with other gemstones.  From the 1600’s when many colored tourmalines were mistaken for zircon to 17th century crown jewels that were originally believed to be rubies.  Deep green gem tourmalines mined in Brazil are still referred to by some as Brazilian emeralds, though it is known that they are tourmalines.  This is a little fact to also keep in mind (mined?) when buying jewelry, as these names can cause confusion (another example is that sometimes smoky quartz is sold as “smoky topaz”).

6.  In 1989, a group of prospectors discovered what are regarded as the finest tourmaline crystals ever found in a small mountain range in the state of Paraiba in South America.  Due to the presence of copper, the stones have a vivid, bright turquoise color and have been valued at over $5,000 per carat.

7.  Tourmalines are considered to be a “cognitive gem,” as they are believed to help increase one’s self-confidence and psychic energies, improve one’s ability to understand and aid in both communication and concentration.